The Kidd and Me
by Joe Versikaitis
In this Blog I will share as a youngster, some of my first experiences with the game of Hockey. Then you'll be able to read the exciting moments in getting to meet Trevor and showing him the painting KIDDER #37. 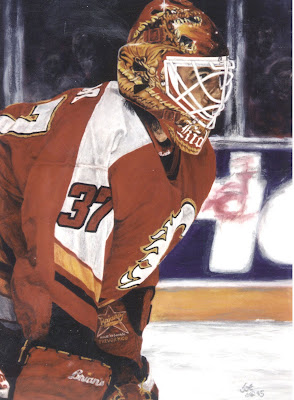 Imagine an eight year old boy who has lived all his young life in a country where there is no winter, no winter sports and the number one sport is soccer. Palm trees and bamboo shoots grew wild along the country sides. Things like Living near a jungle was a play ground and a place where you can go and catch an exotic animal to bring home and freak his mom out. The only thing he knew about snow and bitter cold temperatures is from photos in books or stories that were told from other family members who had the opportunity to travel abroad to a country like Canada. For the longest time the talk was all about moving to Canada and when they finally moved to Canada the experience was one of a culture shock to say the least. 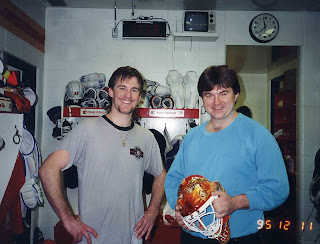 Trevor Kidd and myself before stepping on his toe....lol 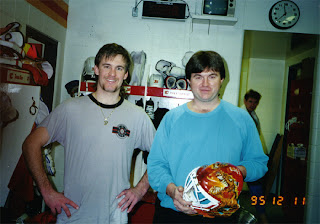 and this is after I stepped on Trevor's toe....
The guy in the background is Gary Roberts...
Photographs by Mike Laux. This one is for you Mike. ( Rest in Peace buddy)
It was a month later that I created the limited edition prints of KIDDER #34..
By the way that cassette tape from my answering machine? I had Trevor sign it..
Thats right sign it......
Yeah that's kind of the look I got from him as well...
The printing, well that's another story...
Thank you for reading The Kidd and Me.
It was an unforgettable day...that`s for sure...
...Joe Versikaitis...
Posted by Alberta Sport Artist Joe Versikaitis at 12:59 AM